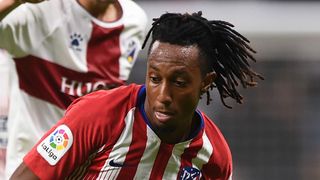 Monaco have signed Portuguese international winger Gelson Martins on loan from Atletico Madrid until the end of the season after the player reportedly rejected a move to Newcastle United.

The 23-year-old has made just eight LaLiga appearances for Diego Simeone's side since his arrival at the Wanda Metropolitano on a free transfer from Sporting CP in July.

He arrives at Monaco with the club second-bottom of Ligue 1 but hopeful of a revival after Leonardo Jardim was reinstated as head coach following Thierry Henry's sacking.

"Gelson is a fast attacking midfielder who has shown great things in the Sporting jersey and who will be able to bring to the squad all his speed and passing abilities."

Gelson's only league start for Atletico came in November, when he partnered Antoine Griezmann in attack as the Frenchman scored in a 1-1 draw with Leganes.

His departure paves the way for Atletico to make a purported move for unsettled Chelsea striker Alvaro Morata.

"I am very happy to arrive at AS Monaco," Gelson said.

"I cannot wait to get back to the field with my new team-mates and do my best to help the team."