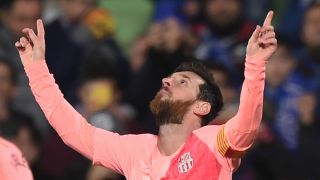 Lionel Messi and Luis Suarez scored sublime goals as Barcelona beat Getafe 2-1 in a bruising encounter and moved five points clear at the top of LaLiga.

Messi took the initiative on 20 minutes with a trademark moment of brilliance and Suarez plundered a superb volley to double Barca's lead.

Getafe quickly responded with a goal from Jaime Mata but, for all their craft and physicality, they could not claw their way back onto level terms.

With Atletico Madrid and Sevilla having played out a 1-1 draw earlier in the day, the result puts Barcelona well and truly in the driving seat at the halfway point in the season as head coach Ernesto Valverde ended a week of speculation over his future with a satisfying, hard-fought victory.

Seriously though, how good was this goal? pic.twitter.com/mPDNa1rJhd— FC Barcelona (@FCBarcelona) January 6, 2019

Dimitri Foulquier had the ball in the net inside the opening nine minutes only for the referee to award a free-kick to Barcelona for a foul on Clement Lenglet.

Barca midfielder Arthur was lucky not to see red for an elbow on Angel Rodriguez before Messi broke the deadlock with a masterclass in quick thinking.

The Argentina ace nutmegged goalkeeper David Soria with his first touch before slotting the ball into the empty net from an acute angle with his second.

Suarez then doubled the lead with an exquisite volley from the edge of the box that sent the ball screaming to the right of a helpless Soria.

Getafe pulled themselves back into the game on the stroke of half-time when Mata bundled into an unguarded net after Rodriguez flashed the ball across the face of goal.

Marc-Andre ter Stegen made a superb save to deny Leandro Cabrera with an hour gone, pushing the centre-back's thunderous header over the crossbar.

Mata then got in behind the Barcelona defence with the ball and rounded Ter Stegen but somehow blazed his shot over the crossbar from 10 yards.

Messi had a chance to score his second of the night and his 400th LaLiga goal when he burst through on goal with 15 minutes left but his shot was too close to Soria, who saved to tee up a tense finish that saw Barcelona hold on.

What does it mean? Title looking like Barca's to lose

This victory will have felt all the sweeter for Barcelona after Real Madrid's 2-0 defeat at home to Real Sociedad earlier in the day and the Blaugrauna are now 10 points clear of their deadliest rivals, as well as being five clear at the top of the table.

While Messi and Suarez scored headline-grabbing goals, Ousmane Dembele was a constant threat for the visitors and often provided the vital link between midfield and attack with his storming forward runs.

Pique and Lenglet ride their luck

Getafe exposed Barcelona through the middle of their defence time and again, and it was only Mata's wayward finishing and Ter Stegen's acrobatic goalkeeping that prevented the hosts from grabbing at least a point.

Barcelona travel to Valencia on Thursday for a Copa del Rey clash with Levante, while Getafe face Real Valladolid at home in the same competition a day earlier.