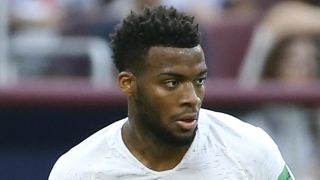 Thomas Lemar said discussions with fellow France internationals Antoine Griezmann and Lucas Hernandez influenced his decision to join Atletico Madrid as he arrived in the Spanish capital to finalise his transfer.

The 22-year-old signed a preliminary agreement to join Diego Simeone's side in June, after impressing during three seasons at Monaco where he won the Ligue 1 title in 2016-17.

Lemar made one appearance for France at the World Cup, playing 90 minutes of a 0-0 draw against Denmark before Les Bleus went on to win the tournament and, as he prepared for his medical, he revealed that Atletico players Griezmann and Hernandez had helped him make his mind up about his future.

"I chose Atleti because I like the club and I've been following the team for a while," Lemar told the club's official website.

"Once the opportunity arose, it didn't take long for me to make my decision.

"Atleti have been interested in me for quite some time and after what Antoine and Lucas told me, I really wanted to come."

Lemar was a regular goalscorer in Monaco's title-winning side, finding the net nine times and providing 10 assists in a side that also featured Kylian Mbappe and Benjamin Mendy.

He only managed two goals in 2017-18 as Monaco finished second but his performances were enough to persuade Atletico to sign him in a deal reported to be worth €60million.

"I'm very happy to be in Madrid and I can't wait to meet my team-mates," Lemar continued.

"I want this [chapter] to start in the best possible manner. I can't wait to start."