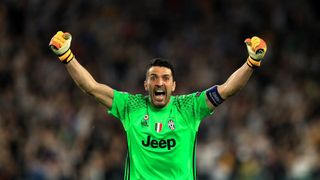 Italian giants Juventus will meet defending European champions Madrid in the final in Cardiff on June 3.

The Serie A titleholders have not won the Champions League since 1995-96 but Atletico Madrid star Griezmann believes Juve will reign supreme at Millennium Stadium, allowing iconic captain and goalkeeper Buffon to pip Cristiano Ronaldo and Lionel Messi to the coveted individual award.

Runners-up last season and in 2014, Atletico almost reached back-to-back finals but the capital club were stopped in the semi-finals 4-2 on aggregate by city rivals Madrid.

"[Finals] hurt more than semis. Because you think you're going to raise the trophy, you make moves with your people ... Then you lose and it's very hard," Griezmann said.

Atletico also secured another season in the Champions League, having claimed third position in LaLiga.

"We did not win titles, which is what we wanted," Griezmann added. "We fulfilled an objective, third, we did a great job. Pity about the semis."

Atletico close out their season at home to Athletic Bilbao on Sunday.