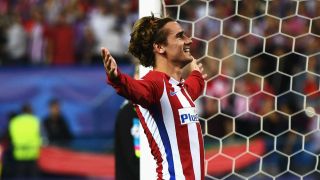 Antoine Griezmann insists his future at Atletico Madrid is in the hands of president Enrique Cerezo and that he is happy at the club as he prepares to decide upon his next move.

Griezmann's future has quickly become the foremost early close-season transfer saga in Europe and Manchester United have been heavily linked to the France forward.

The 26-year-old did much to fan the flames by telling TMC's Le Quotidien programme in his homeland that there was a "six out of 10" chance he would represent United next season.

Additionally, at the launch of his autobiography last week, Griezmann said it would be "no problem" to leave Atleti and that he was "ready to go".

He subsequently rowed back on that stance by last Friday tweeting he was "still a Colchonero" and Griezmann has now told Minute O that his representatives are in discussions with Atleti, while he has asked for the thoughts of team-mates Koke and Diego Godin, along with head coach Diego Simeone.

"I'm good in my club, my agents are talking to Atletico so we'll see what happens," said the player who concluded the 2016-17 campaign with 26 goals in all competitions.

"I'm going to make a decision this summer.

"As I said, I'm happy here, I've talked to my coach, Koke and Godin. It's in the hands of the club president, we'll see how things are going."

At the weekend, Cerezo offered assurances Griezmann would remain at Atletico when they move to their new Wanda Metropolitano stadium at the start of next season.

Speaking to Spanish newspaper reporters, Koke cautioned Griezmann against believing he is bigger than the club.

"He is a very important player for us, we know the quality he has, but most importantly no one player is above the club."