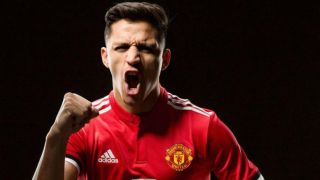 Despite Arsene Wenger's insistence he would stay until the end of the season, Alexis Sanchez has ditched Arsenal and headed north for greener pastures.

The writing had been on the wall for Arsenal and Wenger long before Manchester United broke the news on Monday, with mumblings of the Chilean's discontent starting as far back as December 2016.

Back then, when contract negotiations were reportedly starting to become protracted, Wenger was defiant in the face of speculation, adamant both Sanchez and Mesut Ozil were not going to be allowed to leave before the expiration of their contracts in June 2018. He was the boss and he was going to have his way.

But, fast forward 13 months and the Frenchman has been forced to watch helplessly as his star man - surely frustrated with Arsenal's inability to challenge in Europe or the Premier League - secures a move to a side able to offer such demands. Yet again.

Sanchez is by no means the first big star to escape Wenger's clutches, with supporters starting to become accustomed to seeing their most cherished and adored depart at their peak.

We examine the other major players to leave Arsenal since 'The Invincibles' won the 2003-04 Premier League title and how they fared thereafter.

Their captain, leader, midfield lynchpin and chief battler. Although there were aspects to Vieira's game that were perhaps those of a bygone era - such as his willingness for a scrap with Roy Keane - few can argue that the Frenchman was not missed after his departure.

Wenger later claimed that he sold Vieira in order to get the best out of a young Cesc Fabregas, though the French World Cup winner only went on to enjoy more and more success.

Granted, the Serie A title he won in his only campaign with Juventus was taken from the club during the Calciopoli scandal, but he claimed four legitimate titles with Inter before ending his playing days at City. Arsenal, meanwhile, have won just three trophies (all in the FA Cup) since Vieira left.

When Henry left Arsenal for Barcelona in 2007, his main reason for leaving was the uncertainty surrounding Wenger's future. Little did he know that, 10 years on, the 68-year-old would still be clinging on in what often seems like a cruel joke at the expense of exasperated Arsenal fans.

He reportedly cried upon his departure, though he was soon able to console himself with a clutch on trophies, as he played a vital role in Barca's historic 2008-09 treble and won a total of seven titles in three years with the Catalan giants.

Henry did later enjoy a romantic return to Arsenal for a short loan spell in 2012 halfway through his four-year stint at New York Red Bulls, but supporters would surely have preferred him to just stay put in the first place.

The main beneficiary of Vieira's exit, Fabregas quickly established himself as one of the Premier League's finest midfielders, though the combination of his talent and Barca roots was always likely to be a deadly cocktail in Arsenal's hopes of keeping him long term.

And, to the surprise of no one, Fabregas returned home to Barca in August 2011, scoring 15 and setting up another 20 in all competitions in his first season as the club claimed four trophies.

The rest of his Barca stay was never quite what it should have been, however, as regular mumblings suggested all was not well behind the scenes and he ultimately returned to London three years after he left, incurring the wrath of Gunners fans by joining Chelsea, where he remains.

Nasri had developed into one of the Premier League's finest playmakers by the end of his time at Arsenal, his progress resulting in a transfer tug-of-war between the two Manchester clubs following the conclusion of the 2010-11 season.

City won that battle and, while Nasri seemed to continue his development for a couple of years, he could perhaps be accused of never quite reaching his full potential, even if he did win two Premier League titles.

After a disappointing final two seasons at City, he was sent out on loan upon Pep Guardiola's arrival and impressed at Sevilla, but he did not convince them enough to secure a permanent deal or a move to another European heavyweight. He settled for a switch to Turkey's Antalyaspor and is reportedly angling for another transfer in January.

The saga that surrounded Van Persie's departure to United bears a strong resemblence to that of Sanchez - frustration with Arsenal's failure to challenge for major titles ultimately led to Van Persie stalling on a contract renewal, before eventually telling the club he simply was not going to sign a new deal.

That forced Arsenal into the sale and United were always the frontrunners, with the Dutchman's 26 goals inspiring United to Premier League glory in his first campaign, which was also Alex Ferguson's last in charge.

Although he scored another 22 league goals over the next two seasons, injuries had a noticeable impact on his performance levels and he was allowed to leave for Fenerbahce in 2015.