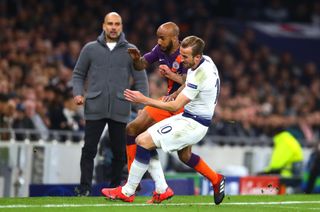 Harry Kane suffered a potential season-ending injury as Tottenham were left to count the cost of a stunning Champions League win over Manchester City.

Son Heung-min struck late on as Spurs claimed a first-leg advantage in the all-Premier League quarter-final with a 1-0 victory at the Tottenham Hotspur Stadium.

But the gloss was taken off the success by fears their talisman Kane, the England captain, could face another lengthy lay-off with an ankle injury.

Kane rolled the joint as he challenged Fabian Delph for the ball just before the hour. To compound matters, Delph then caught him on the ankle.

Kane, who was out for more than a month after suffering ankle ligament damage in January, was carried straight down the tunnel and later left the stadium on crutches wearing a protective boot.

Mauricio on @HKane: "It doesn't look good, but we need to check over the next few days. It's so painful." #UCL ⚪️ #COYSpic.twitter.com/ToKBPNBikd— Tottenham Hotspur (@SpursOfficial) April 9, 2019

“It is so painful,” said manager Mauricio Pochettino. “We hope it is not a big issue and try to recover as soon as possible but it doesn’t look good.”

Asked if he was worried Kane’s season could be over, Pochettino said: “Yes.”

Pochettino felt Delph could have been sent off for the challenge but did absolve the City defender of blame for the injury.

He said: “I said to him, ‘You were lucky’. Checking on the VAR, maybe technically it was a red card but I think both were fighting for a ball and had no intention to damage each other.”

Spurs will now take an unexpected advantage into the second leg against quadruple-chasing City at the Etihad Stadium next week.

“I am happy with the performance and the way we approached the game,” said Pochettino.

“We still have a lot of work to do. Manchester City are still the favourites to win the Champions League and it is going to be tough.”

🗣️ Mauricio: "We were so aggressive and very clever in the way that we played." #UCL ⚪️ #COYSpic.twitter.com/asdvQtzf4A— Tottenham Hotspur (@SpursOfficial) April 9, 2019

City were below par and spurned an early chance to take the initiative when Sergio Aguero had a penalty saved by Hugo Lloris. The spot-kick had also been awarded controversially by VAR for handball against Danny Rose.

Yet manager Pep Guardiola was still able to review the performance in a positive light.

Guardiola said: “Except for a few chances we conceded on set-pieces and counter-attacks we controlled the game.

“When we don’t play good I am the guy who says we didn’t play good, but I don’t have that feeling.”