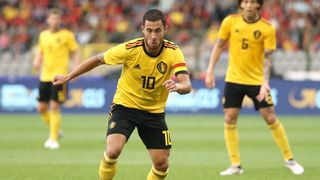 Eden Hazard has suggested that he could swap Chelsea for Real Madrid in the close-season and warned the Blues there must be improvement on last season if he is to stay at Stamford Bridge.

Belgium forward Hazard has been a reported long-term target for Madrid, with former boss Zinedine Zidane said to have been a particular admirer.

Hazard, who is with Belgium for the World Cup in Russia, has now seemingly invited Madrid to make a move for his services, but is adamant he will only leave Chelsea for a project that interests him.

"I do not want to talk about transfer right now. I have been asked so many times about that. I am focused on the World Cup," Hazard told L'Equipe.

"But as I said before, I won everything in London except the Champions League. If I'm here in my career, it's thanks to Chelsea.

"To say that I am going would be too easy and so first of all I want to see what will happen at Chelsea ahead of next season. I want to see if the coach stays or not.

"Real Madrid can interest me, everyone knows that. But if tomorrow this club does not want me, we will no longer speak about it. If they want to buy me they know what they have to do.

"If it is going to Madrid just to go there for the sake of it then no. I need a project and at Chelsea I have one."