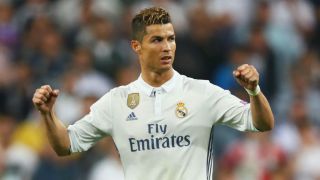 Ronaldo scored a brace in a 4-1 LaLiga win over Sevilla on Sunday, taking his tally to 401 goals for Madrid.

It kept Zidane's men on track to win the league title, although they remain second to Barcelona but are level on points and hold a game in hand.

The Frenchman said Ronaldo, 32, just seemed to step up when it mattered for Madrid.

"He's just got something, he's different," he said.

"It's a very good pass from [Toni] Kroos and there's a gap and he puts it in [for his second goal].

"More than the goal itself, it's what he's done so far. In the decisive moments he's always there."

Ronaldo has scored 37 goals in all competitions this season and his team are next in action at Celta Vigo on Wednesday.