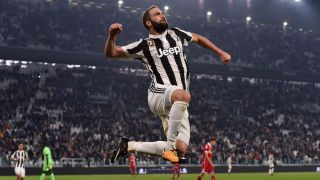 Gonzalo Higuain reached 100 Serie A goals with his opener against AC Milan for Juventus on Saturday.

The Argentina international has been a scoring sensation since arriving in Italy with Napoli just over four years ago, netting 71 times in the league for the Partenopei.

Higuain's final 36-goal campaign at San Paolo in 2015-16 earned a reported €90million switch to Juve, where he has continued his fine form.

A tally of 24 Serie A goals secured the Scudetto in Turin last season, while this landmark effort - a stunning snapshot - was his fifth of the current campaign.

This clash at San Siro was Higuain's 153rd league appearance in Italy, with the 23rd-minute strike his 73rd with his right foot. He has also netted 20 with his left, six with his head and a solitary effort with his chest.