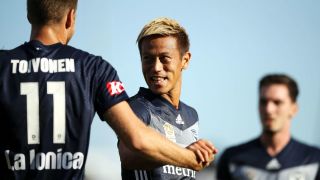 Melbourne Victory star Keisuke Honda is set to miss four weeks due to a hamstring injury in a huge blow to the A-League side.

He completed full training on Monday before straining his hamstring a day later, likely ruling him out of a busy January for Victory.

"It's disappointing for Keisuke, his team-mates, the club and our members and fans," Victory head coach Kevin Muscat said in a statement.

"He was close to playing last weekend - but we ultimately erred on the side of caution and allowed him an extra week to recover.

"He resumed full training with the group this week, with the intent to play against Western Sydney.

"While there wasn't a specific incident of note, Keisuke reported tightness in the area, so we again sent him for scans and received the results late in the day.

"While this isn't the news we wanted coming into a busy period of games, we do have some players coming back into the frame for selection, which is a positive and will assist the group."

Honda has starred in the A-League this season, scoring five goals and providing three assists in eight games.

He is set to miss another six games for Victory, including meetings with Adelaide United, Wellington and Sydney FC.