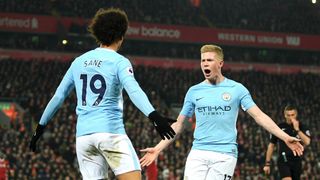 Manchester City manager Pep Guardiola prompted raised eyebrows with the observation his club does not have the money to build a squad able to compete for all four major trophies.

The Catalan's comments came shortly after Alexis Sanchez's move to Manchester United from Arsenal. City were said to have walked away from negotiations as the overall financial package required to land the Chile forward spiralled, with similar reports surrounding Virgil van Dijk's switch to Liverpool earlier in the month.

All such acts of restraint are, of course, relative and Aymeric Laporte's expected arrival from Athletic Bilbao will take Guardiola's spending on first-team recruits above £400million over the course of 18 months at the helm.

This begs the question, if Guardiola does not have the "22 top players" he says he needs to have a shot at nailing the clean sweep of Premier League, FA Cup, EFL Cup and Champions League, how close are City to such selectorial nirvana and at what expense?

Operating under the collective assumption Laporte arrives from Athletic, Guardiola continues to operate with his favoured 4-3-3 and all first-team players are fit and firing, City could put out this imposing line-up. We have included the widely reported transfer fees paid for each player.

City's 12-point advantage at the top of the Premier League has been largely secured by these players. Guardiola observed on Friday that the nature of football means squad building is an ever-shifting task never to be completed, but the beauty of this megabucks team is the level of potential improvement in the tank. Only Fernandinho and David Silva are in their 30s, with Sergio Aguero the remaining player aged over 27. Laporte will face an acclimatisation process and Benjamin Mendy must pick up where he left off before cruciate ligament surgery but you would struggle to argue any of the XI listed do not meet the Guardiola's stipulation of being high-class performers.

And what of City's second-string?Still looks pretty strong, but does Guardiola regard them as good enough to make a tilt at all four trophies?January 28, 2018

This XI comes in at less than half the cost, although the remarkably improved Nicolas Otamendi, as well as Ilkay Gundogan, Bernardo Silva and Gabriel Jesus, mean there are excellent performers to admire. Youngsters Phil Foden and Brahim Diaz do not belong in the top bracket after minimal playing time, but their undoubted ability and Guardiola's pedigree for developing talent means such status can be within reach. Yaya Toure is very much on the decline, while Claudio Bravo and Eliaquim Mangala are signings by and before Guardiola who have not panned out. But these matters concern the passage of time and poor judgement, not a lack of resources.

Sure, City might not have a squad of "22 top players", in line with Guardiola's wider claim that this is simply not possible. However, vast wealth and coaching expertise have put them within arguable touching distance.

"We are not the only team in the world who spend money. There are many."

Guardiola's divergence into City's spending capabilities – his observations came amid a response to a question about Vincent Kompany's injury struggles – was an apparent riposte to Jose Mourinho and Antonio Conte's recent comments regarding United and Chelsea's respective inability to compete with the Premier League leaders financially.

De Bruyne remains City's record buy at £55m. Chelsea and United paid more for Alvaro Morata (£58m) and Romelu Lukaku (£75m) respectively last close season. "We didn't pay more than 100 million, 90 million or 80 million for one player," Guardiola said, while adding the most eye-watering of pay packets are not on offer at the Etihad Stadium.

Save for the occasional scurrilous rumour about Lionel Messi, City have never truly been in the running for the type of mega deals completed at Paris Saint-Germain and Barcelona during the past two windows. Compliance with UEFA's Financial Fair Play laws is the likely reason their manager states: "There are budgets for transfers we cannot pay."

However, in terms of spending accumulation, City are out in front. According to UEFA's annual Club Licensing Benchmarking Report released earlier this month, they have spent more on transfers than any European club over the past five years. Guardiola may note United and Chelsea come in third and fourth respectively over this period.

Many clubs do indeed spend money, but few to the extent that City have. Dismissing any triumph they might enjoy under a coaching visionary as "buying success" would be churlish and reductive. By the same token, should any bid for glory fall short, citing the transfer market as an excuse should pass no muster.