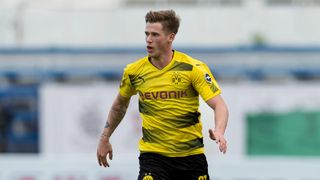 Huddersfield Town have announced the signing of Erik Durm from Borussia Dortmund on a one-year deal.

The Premier League side also have an option to extend Durm's contract by a further 12 months after he joined for an undisclosed fee.

Durm has had terrible luck with injuries and was unable to appear in the Bundesliga for Dortmund last season.

But Huddersfield head coach David Wagner, who worked with Durm at Dortmund, is not worried about any fitness issues affecting the Germany international.

"It is not every day that you can bring a player of the quality of Erik to your club," Wagner told Huddersfield's website. "He is a World Cup winner and has played at the very highest level, so this is a fantastic day for Huddersfield Town.

"Obviously I know Erik well from our time together at Dortmund and he has all the qualities to be a great success in our 'Terriers Identity'. He is a smart, determined character too. He's desperate to play and that is always a good thing for any head coach.

"He has been very unfortunate with injuries for a year now, but he was training with Dortmund at the end of the season and he's passed our medical with flying colours this week.

"That's no surprise to me; he was always one of the fittest players at Dortmund and has great physical attributes; real stamina and speed. All the same, we will manage Erik's workload carefully in pre-season to help him return to the top level that he is capable of."