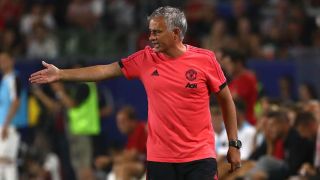 Jose Mourinho wants two new signings but believes he will only land one after providing Manchester United with a list of five transfer targets months ago as his frustration grows at Old Trafford.

Mourinho was not in a good mood after his undermanned United side were beaten 4-1 by Premier League rivals Liverpool at the International Champions Cup on Saturday.

United have been linked with a host of stars but so far only Fred, Diogo Dalot and Lee Grant have arrived, with manager Mourinho making no secret of his desire for the club's hierarchy – led by Ed Woodward – to deliver reinforcements in his quest to catch reigning champions Manchester City this season.

"I would like to have two more players. I think I am not going to get two," Mourinho told reporters. "I think that it's possible I will have one. And that one, I gave a list to my club of five names a few months ago. And I wait to see if it's possible to have one of these players.

United were put to the sword in the second half by a superior Liverpool side, who netted three unanswered goals courtesy of Daniel Sturridge, Oluwaseyi Ojo and Xherdan Shaqiri after Andreas Pereira's stunning free-kick had cancelled out Sadio Mane's opener.

The Red Devils have been without a host of their stars following the World Cup, with the likes of Paul Pogba, Romelu Lukaku, David de Gea, Nemanja Matic – who will miss the start of the season due to injury – Jesse Lingard and Marcus Rashford enjoying holidays.

"This is not our team this is not our squad. We started the game with almost half of the players who are not even going to belong to our squad on August 9. They will not be here.

"This is not our squad. Reinforcements, you mean players that I would like to buy, to add to the squad. That's another thing, but this is not my squad, this is not even half my squad, or 30 per cent of it. So don't look to this.

"You can ask me if I still want new players, that's another question. But in relation to today, we have four or five players who are dead because they care with the club and try to give everything, even risking themselves, because they don't want to let all the kids play by themselves against AC Milan, against Liverpool."

Alexis Sanchez appeared frustrated at times against Liverpool and Mourinho responded by saying, "Do you want him to be very happy with the players he has around him? We are not playing here to improve the team or our dynamic or routines. We are playing here just to try to survive and to have some not-very-ugly results.

"Alexis is the only attacking player we have. We don't have wingers, we don't have strikers. He's the only one who is here, and the poor man is there trying his best, with the frustration of somebody that wants more. Against Milan he played fantastically well, and he did his best here. I don't think you are right to say he is not happy. If he is not happy he is not ready to play two consecutive matches of 90 minutes and 85 minutes working the way he worked.

"For me, these guys are phenomenal in terms of attitude and respect for the club. Really pleased with them."

More than 100,000 fans attended the clash in Michigan but Mourinho said: "The atmosphere was good, but if I was them I wouldn't come. I wouldn't spend my money to see these teams.

"For example I was watching Chelsea against Inter on television today. The people there decided the beach is better than this, so the stadium was empty.

"These people here showed how much they love their clubs. They come just to enjoy their clubs. That is fantastic, and why people like [Ander] Herrera and others have so much respect for the fans, and they give everything they have.

"The atmosphere was obviously fantastic. Two fantastic goals from Pereira from Shaqiri, but the referees they came by mistake. They were called by the baseball federation and thought it was a baseball game, they arrived here and it was soccer! It was good fun."