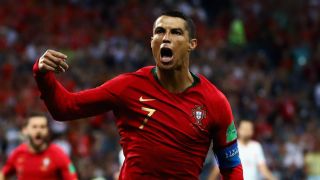 Ronaldo signed a four-year contract with Juve to complete a sensational €112million move from Real Madrid, where he won four Champions League titles in the last five years.

Roma, meanwhile, have sold Brazil international Alisson to Liverpool for a fee that could rise to £65million, a world record for a goalkeeper.

But United States icon Hamm is adamant Ronaldo's arrival will not necessarily make Juventus - who have won the league seven years running - even more dominant in Serie A.

"For us, we're always battling with Juventus, so it just creates another challenge," Hamm told Omnisport. "Obviously, he is iconic.

"The best player in the world coming to Serie A means a lot. I think it raises the stakes and the standards for every club and Roma is no different.

"I think there are going to be a lot more eyes on Serie A. When he plays, he competes every time he steps on the field and he's going to raise the level of everyone around him.

"The league will respond, I know it. With Roma, that's what we plan on doing."

Roma's preparations for the 2018-19 season have seen players including Javier Pastore, Justin Kluivert, Ivan Mercano and Davide Santon sign for the club.