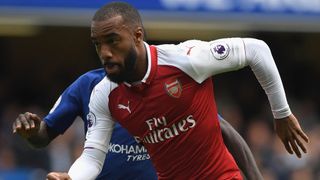 Alexandre Lacazette hopes his close friendship with Antoine Griezmann can help him convince his fellow Frenchman to join Arsenal.

Griezmann was heavily linked with a move to Manchester United in the last transfer window but instead committed his future to Atletico Madrid by signing a new long-term contract.

Despite his international team-mate being tied to the Spanish club until 2022, Lacazette still intends to ask his best friend if he fancies a move to the Emirates Stadium in the future.

"Yeah [Griezmann is my best mate], we are very good friends and have lots of fun," he told Match of the Day magazine.

"Our nicknames for each other are 'Griezzy' and 'Lacaz'. If 'Griezzy' visits me in London, I'm going to ask him to sign for Arsenal!"

While Griezmann stayed put despite interest from England, Lacazette accepted the opportunity to swap Lyon for London.

The 26-year-old has settled in quickly on the pitch, scoring four goals in seven games in all competitions, but is struggling to come to terms with other aspects of life in England.

"I like London, but the weather isn't great! I'm having English lessons at the moment. Someone told me to avoid English food as it's not very good for footballers,” he added.

"The main difference between here and France is there are a lot of very good strikers here – Harry Kane, Romelu Lukaku, Sergio Aguero, Gabriel Jesus, Jamie Vardy, Alvaro Morata. It's going to be a challenge to win the Golden Boot!"