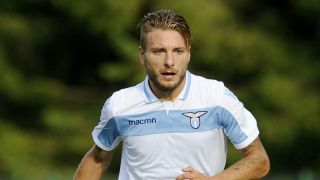 Ciro Immobile has no intention of leaving Lazio despite growing interest in Serie A's Capocannoniere from the Premier League.

Immobile scored 29 goals for Simone Inzaghi's side last season, a feat only matched by Inter's Mauro Icardi, and has been linked with a move away from the Italian capital.

Tottenham are reportedly heading the queue to sign the 28-year-old, but the Italy international insists he is happy in Rome.

And Immobile expects to sign a new deal with Lazio in the near future – even though his current contract runs until 2022.

"When a striker does well it is normal that he is courted by other teams," he told a media conference. "But I have always remained calm.

"I'm happy and proud of what I did [last season]. The president [Claudio Lotito], sporting director [Igli Tare] and I know how things are.

"It was them who called me [to renew], we trust each other and I'm very happy.

"I signed a new contract in November, it's a source of pride for me to re-do the contract after 10 months.

"The sporting director is very busy, but as soon as he's free we will formalise the renewal. He and the president are men of their word, so we'll do everything as soon as possible."

Immobile may have topped the goalscoring charts last season, but he does not expect to in 2018-19 with the arrival of Cristiano Ronaldo at Juventus.

He added: "When Ronaldo arrived I thought I was lucky to have won the scorers' competition!

"He will be a difficult opponent to face, both on the field and in the race to be top scorer."