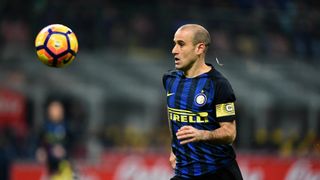 Rodrigo Palacio will leave Inter at the end of the 2016-17 season, the Serie A club announced on Sunday ahead of the final game of the campaign.

The Argentine striker hit 58 goals in all competitions for Inter in his five years at San Siro, making 166 appearances for the Nerazzuri.

However, this season he has been used as a squad player and has only started three Serie A matches and failed to score in the league.

"The Inter number eight has always been a well-respected member of the squad on account of the way he has always given his all for the Nerazzurri cause," an Inter statement read.

"The fans will have many fond memories of the Argentine, not least the stunning backheel flick which handed Inter a derby win over AC Milan in December 2013.

"A striker blessed with impressive tactical intelligence, Palacio is a hard-working team player and even once kept a clean sheet after being called on to fill in between the sticks."

Rodrigo Palacio and Juan Pablo Carrizo to bid farewell May 28, 2017

Inter host Udinese in the final match of the Serie A season on Sunday, with caretaker boss Stefano Vecchi unable to lead his side any higher than their current position of seventh.