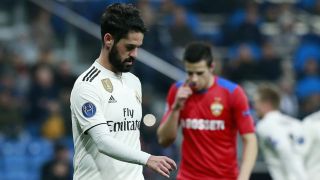 Out-of-favour Real Madrid star Isco insists he is not contemplating leaving the club in January despite failing to win over new coach Santiago Solari.

Isco last started a LaLiga match in the 5-1 Clasico humiliation by Barcelona on October 28, Julen Lopetegui's final game in charge.

Since then, Isco has made Madrid's starting XI just twice; the 6-1 Copa del Rey thrashing of minnows Melilla and a shock 3-0 home defeat to CSKA Moscow in the Champions League.

Solari has consistently insisted he has no problem with Isco and continues to rate him highly.

Still, the situation has unsurprisingly led to speculation suggesting the player will seek a move if things do not improve soon, though he has dismissed such reports in the media.

"I'm not thinking about leaving in the winter market," the Spain international told Deportes Cuatro on Sunday.

"I'm very happy, my goal is to win many titles at Real Madrid."

Madrid are next in action against Villarreal on Thursday as LaLiga resumes following a mid-season break.