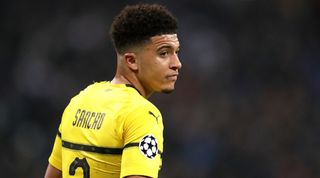 Jadon Sancho's transfer to Manchester United looked set to be the biggest story of the summer. The English winger coming home to the Premier League at last, playing for the club he left as 17-year old's biggest rivals and for a British record fee.

Then, just like that, the deal was off. Reports say that Borussia Dortmund now claim that the deadline for the deal has now passed, with Manchester United to blame for not reaching an agreement before midnight on Sunday. No homecoming, no record fee, no compromise. This morning, Sancho boarded the plane to the club's training camp, in the Swiss spa resort of Bad Ragaz, and that, it seems, is that.

Anyone who genuinely believes the deal will not happen now clearly hasn't got much experience of how mega transfers work, however. They are often long, protracted sagas, that play out in the press for weeks and months.

Dortmund have previous here, having played a shrewd game in Ousmane Dembele's sale to Barcelona in August 2017. Many believed the eye-watering €138m fee to be an outrageous sum for a player who had been brilliant but hadn't showed the consistency of a world class forward.

Back then, Dortmund held all the cards, and they do again with Sancho. The 20-year-old has developed into one of the most exciting players in Europe, with 17 goals and 17 assists in the Bundesliga last season, as Dortmund finished runners-up behind Bayern Munich.

Sancho signed a new €190,000 a week deal at Westfalonstadion in October 2018, with his deal not expiring for another three years - not two as originally reported. They trust that Sancho is not the kind of player to down tools in a bid to seek a transfer and know the Euros next summer will be enough motivation for Sancho to give his best again next season.

While Manchester United feel Dortmund's €120m valuation is a little on the extortionate side - it's actually just over his valuation on reliable stats hub Transfermarkt - Dortmund have no reason to budge. Deadline or not, if United are willing to agree to the German club's terms, and they have the financial muscle to do so, Sancho will be a Manchester United player before the start of the new season.

Ole Gunnar Solskjaer has identified the England International his number one transfer target, with the Red Devils not currently possessing a natural right winger. Other targets are being looked into but United aren't the sort of club that give up easily.

With Sancho keen to return home to England - and pocket a reported €380,000 a week at Old Trafford - Dortmund keen to make as much money as possible on a player who cost them just less than €8m three years ago, and United desperate to land the youngster, you'd be a naive to believe this transfer saga is anywhere near over.