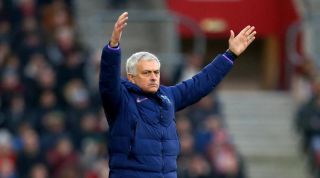 Jose Mourinho has hit out at the Premier League for scheduling Tottenham's game against Aston Villa on Sunday afternoon.

Spurs will have enjoyed 10 days off by the time of kick-off at Villa Park, having not played a competitve game since last week's FA Cup fourth-round replay against Southampton.

However, the north London side are set to face RB Leipzig in the first round of their last-16 Champions League clash on Wednesday.

Leipzig will benefit from an extra day's rest, with their Bundesliga encounter against Werder Bremen set to take place on Saturday.

And Mourinho has criticised the decision to hold Tottenham's meeting with Villa just three days before their European clash.

“Do they have a Champions League game next week? No. Not Leicester, not Wolves. Wolves have a Europa League game on Thursday.

“We are the team in England that plays a Champions League game on Tuesday [actually Wednesday]. We don't play Friday, we don't play Saturday, we play Sunday. I don't think it is normal.

“You can tell me it was because your game was chosen to be on TV on Sunday at 12 o'clock and I ask you, in the other five matches of the Premier League this weekend, is there not another one that could be played on Sunday?

“It's as simple as that. That's the only thing I say – there is no care. They just chose what they want and they don't think how they can hurt an English team.

“It’s a very difficult week for us, and then, of course, we would like to play Chelsea on the Sunday after Leipzig, but no [we play] on Saturday.

"And we would like to play Saturday 5pm – but instead we play 12 o’clock. So it’s a really hard week for us – Sunday Villa, Wednesday Leipzig, Saturday Chelsea.”