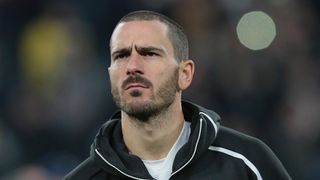 Leonardo Bonucci has suffered an ankle injury, Serie A champions Juventus have confirmed.

The defender started Sunday's 2-1 win at Lazio but had to be replaced before half-time, having tried to play on after being hurt early in the game.

Juve announced in a medical update on Monday that Bonucci has sprained his right ankle and reports have claimed he could be out of action for as long as a month.

The Italy international may therefore be a doubt for the first leg of Juve's last-16 Champions League tie with Atletico Madrid on February 20. The second leg will be held in Turin on March 12.

Bonucci is one of Juve's key players, the 31-year-old starting 17 games in Serie A this term, with Massimiliano Allegri's men seeking to clinch an eighth consecutive title.

Juve's win at Lazio, sealed by a late Cristiano Ronaldo penalty, saw them move 11 points clear of Napoli at the top of the table.

How did you celebrate last night's win at the Olimpico?