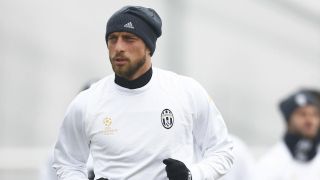 Juventus will be without Medhi Benatia, Claudio Marchisio and Stefano Sturaro for their Coppa Italia semi-final against Napoli.

The Italian champions named a 21-man squad that did not include the trio ahead of Tuesday's first leg in Turin.

Marchisio misses out due to bruising in his right knee picked up during the 2-0 home win over Empoli in Serie A last time out.

Sturaro (abdomen) misses out after also starting the match against Empoli, while defender Benatia (gastroenteritis) was an unused substitute.

Star forwards Gonzalo Higuain and Paulo Dybala are among the players named in the squad.

Our squad list for tomorrow night's semi-final is IN! Your predicted starting XI for ?   February 27, 2017