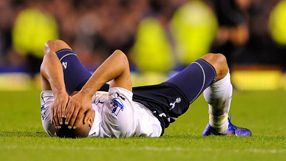 French central defender Kaboul is seeing a specialist in France after injuring his knee in the first half of the 2-1 home defeat by Norwich City in the Premier League on Monday.

With Ledley King also struggling, Michael Dawson out for the season with an ankle injury, and Sebastian Bassong on loan at Wolverhampton Wanderers, manager Harry Redknapp is short of defensive options. Former Chelsea player William Gallas likely to partner Ryan Nelsen at Wembley.

"Kaboul has picked up a knee injury and gone back to France to see a specialist," Redknapp told reporters at the club's training ground on Friday.

"He landed awkwardly against Norwich and definitely won't play against Chelsea. We've had to chop and change centre-backs so many times this season.

"Kaboul has been the only steady one and now he's out. Ryan Nelson and Gallas are the last two standing. I wouldn't write off Ledley for sure but he wasn't himself against Norwich."

Tottenham have won only one of their last eight Premier League matches, a slump in form that has threatened their place in the top four. But Redknapp, who guided Spurs to the FA Cup semi-final two seasons ago before losing to Portsmouth, said the season could still end on a high.

"It's a great game to look forward, a semi-final, a great position for the club to be in at this stage of the season," Redknapp said. "We have a semi-final to look forward to and we're still trying to get into the Champions League.

"If at the start of the season you had said we were going to be in this position we would have been delighted."

However, Redknapp said it was about time Tottenham began adding to their collection of silverware.

"There is not much beween us and Chelsea really although they have the medals to show for what they have done over the recent years," he said.

"Spurs have won two trophies since the FA Cup in 1991 and both of those were the League Cup. It's about time Spurs won another trophy. We are not far away to challenge for trophies but we have to keep improving."

Scott Parker is expected to be fit for the evening kick-off at Wembley after missing the Norwich defeat with tight hamstrings while Louis Saha is a slight doubt with a groin strain.