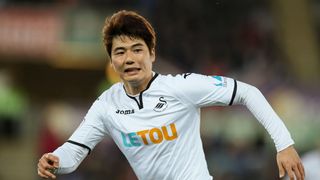 Ki Sung-yueng has announced he will leave Swansea City when his contract expires at the end of June.

The South Korea international, who became Swansea's record signing when he joined from Celtic for £5.5million in 2012, confirmed his departure a day after the club were relegated from the Premier League.

Ki has been linked with a switch to Serie A giants AC Milan and was named in Shin Tae-yong's preliminary 28-man squad for the World Cup in Russia on Monday.

"It was a great privilege to play for Swansea for five years," Ki wrote on Instagram.

"Just want to say thanks to all Swansea fans who always gave passionate support to us every single game.

"[In the] last couple of years personally I felt sorry to the fans about our inconsistent performances on the pitch and really feel frustrated and disappointed about what happened to us [on Sunday], but I believe Swansea will come back stronger and will find the philosophy of Swansea Football Club for the fans.

"Also [a] big thanks to all my team-mates it was a great joy to work with you guys on and off the pitch.

"I wish all the best of luck in the future to everyone once again thanks."