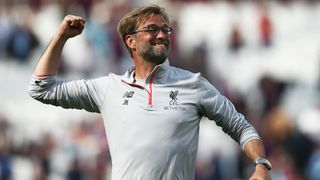 Jurgen Klopp hopes Liverpool will wrap up their transfer dealings well ahead of the start of next season, but acknowledged he might have to be patient before he sees the first new arrival walk in.

The Premier League side signed Georginio Wijnaldum, Sadio Mane, Joel Matip, Loris Karius and Ragnar Klavan last year and Klopp is keen to bring in more fresh blood ahead of the 2017-18 campaign after they sealed Champions League qualification.

Nevertheless, the former Borussia Dortmund boss realises it might take longer than he initially hoped before Liverpool announce the first new signing.

"I wish new signings would begin to arrive tomorrow but unfortunately that is not really likely," Klopp told reporters.

"The best scenario is that you have them for the start of pre-season but I am not sure if it will happen this time.

"It is different with all different players so we will see. That is not a big problem because we all know if they are fit and healthy we have a really strong squad and that means we could start with this squad.

"But that does not mean that I would prefer this, I would love to have them in as soon as possible but we will see."