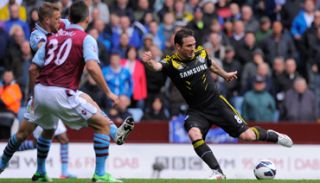 Lampard, who made his Chelsea debut nearly 12 years ago, struck in the 61st and 88th minutes at Villa Park to give his side a 2-1 victory in the Premier League that virtually ensured Champions League football for the London club next season.

It took the England midfielder to 203 goals for Chelsea, eclipsing the record held by striker Bobby Tambling who played for Chelsea from 1959-70.

Lampard is out of contract at the end of the season and is yet to be offered a new deal by club owner Roman Abramovich. It had been suggested the 34-year-old was likely to be forced out of Stamford Bridge, but media reports say the Russian billionaire might yet extend his stay.

"It's great to get the record, especially in an important game," Lampard, who has 607 appearances for Chelsea, told the BBC.

"I'm hoping I'll be here, and at the end of the season we'll get a decision on that.

"Today was really nice not only personally but it got us into the Champions League, and a club like Chelsea need to compete at that level. Strange things have happened at this club over the years but the one constant is the success.

"The manager situation has been pretty clear for a while now so the manager and the players want to make the best of the situation. I hope to be here next year. We've got a huge week coming up and hopefully at the end of that week we can sit down and sort it out."

His first goal came from a curling left-foot shot from 10 metres. The second was a tap-in from one metre, though it seemed to encapsulate the gifts of a player renowned for well-timed runs into dangerous areas and clinical finishing.

The winner was celebrated in some style too.

Lampard, who was signed from West Ham United for 11 million pounds in 2001, ran to the travelling support and looked to the heavens as he was mobbed by team-mates and a few Chelsea fans jumped on to the pitch.

He dedicated the goals to his mother who died in 2008.

"I have been here a long time... I lost my mum a few years ago and she was my biggest supporter, so it's for her," Lampard told Sky Sports.

"It means everything, it's amazing. The support I've had from my team-mates, I think you can see that there at the end, and I am thankful to every one of them because they are the ones who put it on the plate for me sometimes.

"And the fans have all been willing me to do it for a long time and have probably been frustrated alongside me not getting there.

"It's right up there. Not much beats Munich [when Chelsea won the Champions League last season] because that was amazing for the team and the club, but personally it is another great day and I am really pleased.

"Bobby Tambling is a great man and I was pleased to level, but didn't want to overcook that celebration out of respect for him."