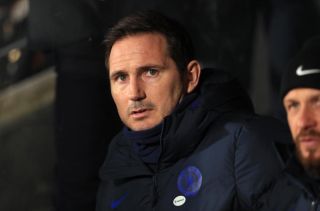 Fourth-placed Chelsea can open up a nine-point Premier League lead on ninth-placed United with victory at Stamford Bridge.

But not even that sizeable advantage would be enough for Blues boss Lampard to believe United would be out of the top-four running.

When asked if United’s top-four hopes would be over with defeat on Monday, Lampard said: “No, not on nine points. Not at this time with the amount of points to play for and the way the Premier League is, certainly not.”

Sheffield United, Wolves and Everton all sit between Chelsea and United in the table, with Lampard admitting the Premier League’s increasing financial might has altered the top-four equation.

“It’s tougher, in terms of picking up points as you can see,” said Lampard. “It’s just a changing of the Premier League slightly, teams now can invest a lot of money.

“Teams can get promoted to the Premier League and spend £100million and it doesn’t guarantee success.

“That’s the kind of challenge we are talking about but challenges are a good thing, and it’s a challenge for us.”

Asked whether he discusses league table scenarios with his players, Lampard continued: “I would do at certain times, I don’t think you should speak about it too much, because you end up with your eyes everywhere, up and down the table and around yourself.

“And we can only affect ourselves first and foremost. But I don’t think it’s the worst motivational tool for all of us to really understand the situation.

“Because I have a deep sense of pride about wanting to get fourth place, and I remember having that as a player, we were fighting for first and second place for a good period when I was here and that’s how you should be.

“So I don’t mind referencing that to the players, I look at the league table probably two or three times a day sometimes. You can become obsessed with it, but that’s for me to do.

“For the players, I think reminding them sometimes is fine, it’s a good tool.”

United thrashed Chelsea 4-0 at Old Trafford to open the season, but since then the two sides’ fortunes have reversed.

Chelsea have the chance to cement fourth place with a win over United, with Lampard keen for his men to prove their quick development since that opening-day shock.

Asked about the loss at United, Lampard said: “It was only a surprise probably because of having watched the performance. It wasn’t a 4-0 game. I’d be the first to criticise myself or us.

“And I was honest with the players afterwards, I said ‘that’s not a 4-0, but let’s not walk away from the small details that made it a 4-0. But don’t take this as a big kick in the teeth, because it shouldn’t be on performance’.

“And then four days later they went toe-to-toe with the best in the country this season by a mile, and possibly could or should have gone and won the Super Cup.

“It didn’t feel nice on the day and it would be great to correct it on Monday. But at the same time I didn’t take it as a huge hurtful thing.

“I did see enough in that game, and I saw more of it in the Super Cup.

“After the Super Cup it was horrible to lose again, but I said to the players then that we had enough there to have a successful season.”