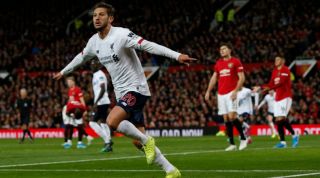 Leicester City have made an initial approach to sign Adam Lallana this summer after Liverpool informed the midfielder he would not be offered a new contract, reports Sky Sports.

Lallana will become a free agent at the end of the season when his current deal at Anfield expires. As well as Leicester, a number of other Premier League sides are believed to be interested in the 31-year-old.

Having entered the final six months of his current contract, Lallana is free to sign a pre-contract agreement with a foreign club. However, transfer rules state he cannot negotiate with another English team unless given permission by the Reds.

Luckily for Lallana, Liverpool have granted him permission to start planning the next move in his career.

Leicester manager Brendan Rodgers is keen to bring the England international to the King Power Stadium, which is why the Foxes have declared their interest early. Rodgers wants to add another winger to his squad and views Lallana as the ideal fit.

The Northern Irishman knows the midfielder well after signing him from Southampton in 2014 when he was in charge at Anfield.

Lallana is reviewing his options before making a decision, but Leicester's case is boosted by the fact it's looking increasingly likely they will be playing in the Champions League next season.

The Englishman has played just 13 times for the Reds in 2019/20. His only goal was the equaliser in the 1-1 draw with Manchester United that maintains the leaders' unbeaten record.