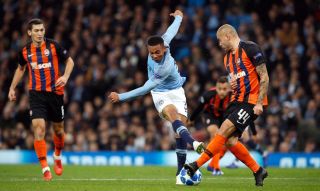 Manchester City launch their latest attempt to win the Champions League as they travel to Ukraine to face familiar foes Shakhtar Donestsk in Kharkiv on Wednesday.

Here, the PA news agency takes a look at what lies in store for Pep Guardiola and his squad in the Group C encounter.

This is hardly a step into the unknown for City, as it is the third consecutive year they have been drawn in the same group as the Ukrainian champions. Two years ago, City beat Shakhtar 2-0 in Manchester but then, having already secured their place in the last 16, lost 2-1 in Kharkiv in December 2017. That defeat was City’s first loss of the 2017-18 season in any competition. The sides renewed acquaintances last season with City winning 3-0 in Kharkiv and 6-0 at the Etihad Stadium. Gabriel Jesus scored a hat-trick in the latter.

⚒ Luis Castro is Shakhtar's new manager! His agreement with the club is a two-year deal.— FC SHAKHTAR ENGLISH (@FCShakhtar_eng) June 12, 2019

One aspect of the contest that will be different is that Shakhtar now have a new coach. The highly-regarded Paulo Fonseca, who memorably conducted his post-match press conference in a Zorro mask after beating City two years ago, has left for Roma to be replaced by fellow Portuguese Luis Castro. Castro, 58, had an unheralded playing career as a left-back, mainly in the Portuguese lower leagues, before moving into coaching. Again, he spent considerable time in the lower divisions before guiding Penafiel to 11th in the top flight in 2005. He then moved into the Porto youth system and even had a spell as first-team caretaker coach – following Fonseca’s departure – in 2013-14. Stints at Rio Ave, Chaves and Vitoria followed before he took over at Shakhtar this summer.

Shakhtar’s successes throughout the modern era have been based around a strong core of Brazilian players but there is also a Ukrainian that City will need to keep a close eye on in Yevhen Konoplyanka. City should know all about him. The 29-year-old winger scored against City for Sevilla at the Etihad Stadium in 2015 and he was also in the Schalke side they came up against in the last 16 last season.

Shakhtar are currently Ukraine’s foremost club, having won their domestic title 12 times in the past 18 seasons. Their dominance has stretched to league and cup doubles in the past three years. They began the current campaign by losing to Dynamo Kiev in the Ukrainian Super Cup but they have won their first seven games in the league and are already seven points clear at the top of the table. In terms of Champions League pedigree, Shakhtar reached the quarter-finals in 2011 and have made the last 16 in four of their last eight appearances in the competition. Their loss to City in Kharkiv last year was their only defeat to an English team in eight home games in the Champions League. Shakhtar have not played in Donetsk since the outbreak of war in 2014 and have been based in Kharkiv since early 2017.

Manchester City midfielder Fernandinho is one of many Brazilians to have played for Shakhtar since their rise to prominence early in the last decade. The club currently have 11 Brazilians in their squad, including Ukraine internationals Marlos and Junior Moraes. Fernandinho spent eight years at Shakhtar before joining City in 2013. City midfielder-turned-left-back Oleksandr Zinchenko came through the Shakhtar youth ranks but never made a senior appearance for the club.