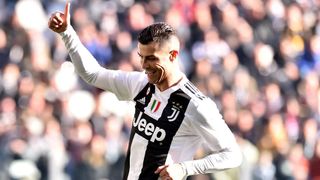 Cristiano Ronaldo's absence is still keenly felt at Real Madrid, according to William Carvalho, who would not have sold him even for €200million.

He suggested that no amount of money would have lured him into selling the star forward to Juventus, had it been his call to make.

Asked if Madrid, languishing a relatively lowly fifth in LaLiga, were suffering without Ronaldo's goals, Carvalho told Marca: "Of course, Cristiano is needed in any team in the world and in Real Madrid they notice a little bit, not much, the goals that Cristiano scored.

"But now he's fine, he's good in Juventus and he'll score many goals there.

"It is difficult to know [why he left], I do not know what happened, but I know how Cristiano is, he has an ambition the size of the world, he wants to always do things well and show that he is the best.

Looking ahead to the showdown with Santiago Solari's side, who are only four points above Betis, Carvalho cited the role the fans will have to play at Benito Villamarin.

"Madrid have a team with great quality, top players who make a difference in a second, we have to be attentive and focused," he said.

"It will be a difficult match, but we play at home, the fans will be on our side and I think we will have the ball, to control the game, as we always do."