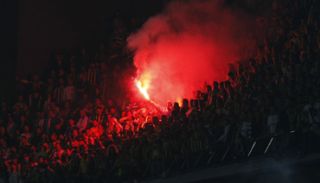 The suspect was caught after he fled Istanbul by bus, Dogan news agency reported on Wednesday.

Police said the accused man did not know his victim, 19-year-old Burak Yildirim.

"His only motive behind the murder seems to be the football rivalry, which is really sad," Istanbul police chief Huseyin Capkin told reporters.

Capkin said on Monday that the suspect's uncle had given police officers a blood-stained Galatasaray jersey.

More than one hundred people were detained after the game, which Fenerbahce won 2-1 at home. The tense atmosphere on the pitch resulted in two red cards and Galatasaray striker Didier Drogba and Ivory Coast team mate Emmanuel Eboue were heckled.

Fenerbahce are second in the league behind Galatasaray, who wrapped up the title three weeks before the end of the season.