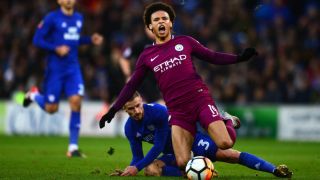 The Germany international was substituted at half-time of Sunday's game after being hurt by a challenge from Joe Bennett.

Scans on Monday showed the extent of his injury, although City are reluctant to estimate the length of Sane's absence.

"Manchester City can confirm that winger Leroy Sane sustained ankle ligament damage during the FA Cup win over Cardiff," the club said in a statement.

"The Germany international was substituted off at half-time following a challenge from Bluebirds player Joe Bennett.

"Sane has since undergone scans that confirm the 22-year-old is set for a spell on the sidelines - although no timeline has yet been set for his return."

Manager Pep Guardiola said he expected Sane to be "out for a while" and suggested he could be missing for a month or possibly longer.

The 22-year-old has been in spectacular form for the Premier League leaders this season, scoring 11 goals in all competitions.