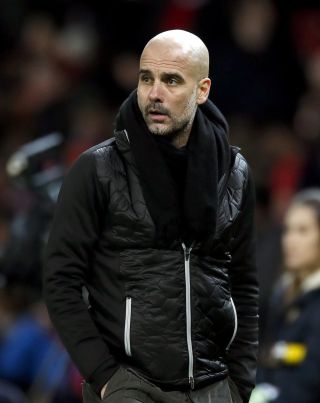 Pep Guardiola claims not to have given much thought to whether the Manchester City squad might be revamped in the summer.

City are expected to make some changes for next term after a disappointing Premier League title challenge this time round.

Guardiola’s side, who began the campaign with hopes of winning a third successive league crown, trail current leaders Liverpool by 22 points.

Guardiola said: “I don’t know. I have an idea but not even had contact from anyone in terms of that because, during the season, I am not too much ready to think about that.

“Of course we have to do something because David (Silva) is leaving and in some positions we are going to do it, but I don’t know how many or how much because the market is always difficult and still there are two or three months, and two or three months can change a lot of things.

“There are incredible nice things still to fight for. We are in a final in two or three weeks to win one more title and we have the FA Cup, the league to try and finish second in and fight for qualification for the Champions League next season, and two big games against Real Madrid.”

⏮⏮⏮@aguerosergiokun's penalty proved the difference the last time we faced the Hammers at the Etihad…— Manchester City (@ManCity) February 8, 2020

Guardiola’s own long-term future is unclear. The Spaniard is contracted only to the end of next season and there has been speculation he could leave even sooner.

Guardiola, however, insists that his situation will have little bearing on players when they consider whether to join City or not.

He said: “That’s not the only reason they come here – because I am here. We have been in contact with others who didn’t come when I was here.

“I think the club is big enough and good enough to be attractive for players who want to play in the way we do, or they watch TV and see us and we have played against them.

“They will still want to come because of economic reasons, or because just they want to play for City. I think Man City is not a bad solution for players.

“The club was stable and moving forward before I came here. I’m not the reason why – the club is good enough, and we need players to believe they can help us.”

City host West Ham at the Etihad Stadium on Sunday. Raheem Sterling is out with a hamstring injury and Oleksandr Zinchenko is suspended.

Benjamin Mendy and John Stones, who have both missed the last four games, have been in training.