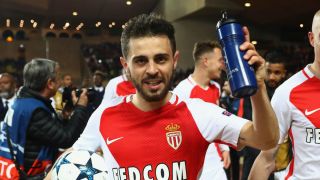 The arrival of the Portugal international, who is thought to have penned a five-year contract at the Etihad Stadium, represents a major statement from boss Pep Guardiola.

City's manager has moved swiftly into the transfer market after a trophy-less first season at the helm and the release of senior professionals Pablo Zabaleta, Bacary Sagna, Gael Clichy, Jesus Navas and Willy Caballero at the end of their contracts.

Silva was one of the stars of the Monaco team that stormed to a first Ligue 1 title since 2000.

He scored 11 goals and supplied 12 assists in all competitions, featuring in both legs as Monaco dismissed City in the last 16 of the Champions League on away goals.

A delighted Silva told City's official website: "It feels great. To be honest I'm now at one of the best teams in the world.

"To be part of this club and to have this opportunity is great. I'm very happy to be part of Manchester City's team and I look forward to trying to do my best to help the team reach their goals."

The 22-year-old, who joined Monaco from Benfica on an initial season-long loan in 2014, missed out on his country's Euro 2016 triumph through injury, but has 12 caps and one goal at international level.