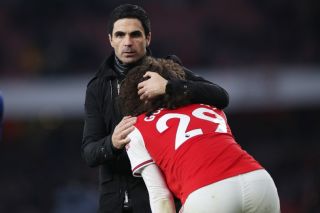 Matteo Guendouzi is only 20 years old but still knows his own mind and refuses to shirk a challenge - even one involving his manager.

Mikel Arteta was on the receiving end of the latest display of his fiery personality, which resulted in the midfielder being dropped for Arsenal’s 4-0 win over Newcastle United.

According to a story in The Telegraph, an argument took place on the club’s winter training camp in Dubai. It started on the training pitch and continued back at the team hotel.

Much like his mentor Pep Guardiola, Arteta and his coaching staff are notoriously demanding of their players and were disappointed with Guendouzi’s attitude and body language. An argument ensued when he was confronted about it.

This resulted in Guendouzi being left out of the Arsenal squad for the first time in the league this season. He has made 21 appearances, 17 from the start, although he hasn’t been a regular since Arteta’s appointment in December.

Guendouzi was left on the substitutes’ bench for Arteta’s first match, a 1-1 draw with Bournemouth. He returned to the starting line-up against Chelsea but has started only once more in the league since then.

In his absence yesterday, Arsenal recorded the biggest win of Arteta’s reign so far, winning 4-0 at home to Newcastle.

The game was goalless at half time, but Pierre Emerick-Aubameyang and Nicolas Pepe scored in quick succession to put Arsenal in control. Late strikes from Mesut Ozil and Alexandre Lacazette made for a more comfortable margin of victory.

Guendouzi’s outburst is seen as another sign of immaturity from a hotheaded player. Earlier this season he responded to taunts from Watford fans by gesturing the scoreline with his fingers. Arsenal were leading 2-1 at the time but went on to concede an equalizer.