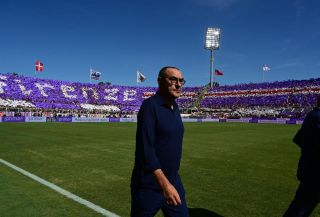 Maurizio Sarri hailed his side’s character but ended up counting the cost of a  goalless draw at Fiorentina after taking charge of Juventus for the first time.

The former Chelsea coach had missed Juve’s first two games of the season due to a bout of pneumonia but he watched prospective injury problems pile up at the Stadio Artemio Franchi.

Danilo, Douglas Costa and Miralem Pjanic were all forced off early due to muscle issues with Pjanic, in particular, now a doubt for his side’s Champions League trip to Atletico Madrid on Wednesday.

Sarri told a press conference: “For Miralem it (facing Madrid) could be a minor problem but we will see tomorrow morning.”

Juve’s failure to put away their lowly opponents was a source of frustration for Sarri, who insisted they are still finding their feet after injuries and international duty.

Sarri added: “There had been a physical decline in the first two games, but then this summer we had several players at the Copa America and others in the infirmary.

“It has taken time to get them into the rhythm of the game. We need to grow a lot in terms of quality, tactics and athletics.

“It was not a high-level game from a technical point of view and the situation was made complicated by changes we used to replace the injured players.

“Having fresh players in the final stages of the game would have been important. I am aware that a team with less character would lose such a game.”