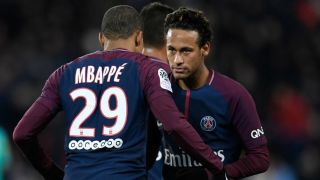 Unai Emery is bracing himself for facing Montpellier this weekend without Neymar and Kylian Mbappe at his disposal.

Having lost 2-1 at Lyon in their last Ligue 1 outing, Paris Saint-Germain will be aiming to bounce back on Saturday but look set to be deprived of the star duo's services.

Mbappe was hurt in a collision with Lyon goalkeeper Anthony Lopes, while Neymar missed that match having stirred controversy in the 8-0 win over Dijon that same week after he refused to allow Edinson Cavani to take a late penalty that could have seen him become the club's record goalscorer.

Providing a fitness update on the pair at Friday's media conference, head coach Emery said: "We need to be patient with [Mbappe]. I do not think he will be ready for Montpellier.

"[Neymar has] a minor injury. However, he needs to feel 100 per cent before he can play again. Yesterday, he felt good [in training]. I hope it will be the same later."

The former Barcelona forward has been linked with Real Madrid, but Emery moved to refute the notion that the world's most expensive player would ply his trade elsewhere in the near future.

"He is happy on the pitch and with his team-mates," insisted the Spaniard.

"He will become the best player in the world. That is for sure. He will do so here."

Surprise new signing Lassana Diarra is not likely to play any part, with Emery suggesting he needed "one or two weeks to be ready to compete".

Emery also expressed his disappointment at the three-match ban handed to Dani Alves following his red card against Lyon, with the sanction including an additional suspended one-game ban.

"His three-match suspension is totally unfair," added the 46-year-old.

PSG were held to a 0-0 draw at Montpellier in September.