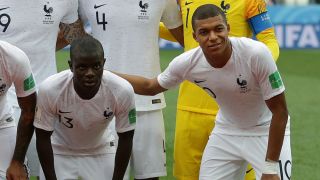 Kylian Mbappe has revealed he spent the World Cup encouraging N'Golo Kante to join him at Paris Saint-Germain and recommended the Chelsea midfielder to Nasser Al-Khelaifi.

Mbappe and Kante were key figures in France's success at the World Cup in Russia, the pair featuring in every match as Didier Deschamps' men lifted the trophy.

Reports suggest PSG are now attempting to reunite them at the Parc des Princes by prising Kante away from Stamford Bridge, where he is set to enter his third season.

The midfielder left Caen for the Premier League in 2015, but a return to Ligue 1 could be on the cards if Mbappe and his club's owner have their way.

"It's true that [Al-Khelaifi] has consulted me," Mbappe told France Football. "And I told him again that Kante would be good for our team.

"I spoke to N'Golo during the World Cup, but not extensively because I know what it is when you bombard your brain with transfer stuff...

"In the end, I left notes in his pockets that he would have discovered once he returned home, to get the message across."

Mbappe, 19, underscored his reputation as the hottest property in European football by winning the FIFA Young Player award at the World Cup.

The teenager netted three goals at the tournament, including one in the final, with his performances believed to have heightened the interest from Real Madrid.

The forward confirmed he has already received one transfer proposal - from French president and Marseille fan Emmanuel Macron.

"He even managed to suggest that I would have to go play one day in Marseille," Mbappe said of his discussion with Macron.

"I replied that it was impossible!"