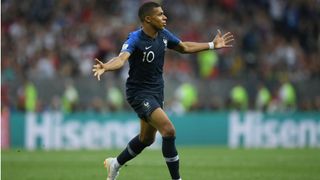 France and Paris Saint-Germain star Kylian Mbappe has everything to eventually win the Ballon d'Or, according to Blaise Matuidi.

Mbappe, 19, is among the nominees for this year's award, although the attacker is not considered as one of the favourites.

However, Matuidi believes the teenager – who helped PSG win a treble last season and was named the best young player as France claimed the World Cup – will win the coveted individual prize one day.

"He's among the nominees so he can win. He's shown that he is a great player despite his young age," he told a news conference.

"What he shows on the pitch is very impressive. We also see it in training. We are very happy to work with him.

"I'm not going to give favourites because I don't want to have enemies in the group. May the best man win.

"But Mbappe has everything to win the Ballon d'Or this year or in the future."

Matuidi, whose team are preparing to face Germany in the Nations League on Tuesday, lauded the 25-year-old centre-back as one of the world's best defenders.

"Raphael had a great season. He won the Champions League. He is a world champion. That's good for him," he said.

"He is one of the [Ballon d'Or] nominees. If he's nominated, it's because he deserves it. Currently, he is one of the best defenders in the world or perhaps the best if we look at his performances in the few seasons. But there are other great defenders.

"Anyway, he's had a great career, even if it's far from the end. He's still young. He has already won a lot, but he still has time to win even more – especially with the national team."