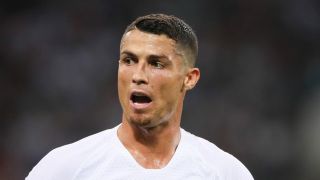 Cristiano Ronaldo's agent says that if he does leave Real Madrid it will be for a "new stage and challenge".

Serie A champions Juventus are reported to have made a bid of £88million for Ronaldo, who is Madrid's all-time leading goalscorer after nine seasons at the Santiago Bernabeu.

His future at the club has been shrouded in doubt ever since Los Blancos defeated Liverpool 3-1 to win a third straight Champions League in May.

The Portugal superstar spoke about the club in the past tense after that game when he said: "We will talk in the future. It's been really beautiful to play for Real Madrid. I'll give a response in the coming days."

With speculation heating up that a move to Italy is imminent, Ronaldo's agent Jorge Mendes has dropped the biggest hint yet that his client could make a dramatic switch.

"If Cristiano Ronaldo does leave Real Madrid, he will be eternally grateful to the club, the president, the whole team, the medical staff, the supporters and all the Madridistas around the world," he told Portuguese newspaper Record.

"It will only be for a new stage and a new challenge in his brilliant career."

Ronaldo joined Madrid in 2009 after six years with Manchester United, scoring 450 goals in 438 games for the Spanish giants.