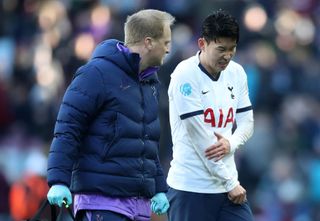 The South Korea international has undergone surgery on a broken arm suffered in Sunday’s 3-2 win against Aston Villa, where he scored two goals with the injury.

The club have said that he will be out for a “number of weeks” but Mourinho is much more pessimistic.

It is a massive blow to Spurs, who could be without Harry Kane for the rest of the season, given the fact Son has scored six goals in the last five games.

Mourinho described the news as heartbreaking and says that he must now “play without a striker”.

“I’m don’t count on him again this season,” he said ahead of Tottenham’s Champions League tie with RB Leipzig.

“If he plays two or three games then it’s because he (the press officer) is very optimistic, but I’m not counting on him.

“Yeah, bad news. For how long we are going to miss him, Simon (Felstein, press officer) said a very nice way to write the statement.

“If I was the one to write the statement I would write different than he did. So you can understand what I mean. We miss him. According to Simon for a number of weeks.

“But we have to recover from broken hearts and we have to fight with the team we have.”

The timing could not be worse for Spurs given they are entering a possible season-defining period, with the two-legged Champions League tie with the Bundesliga side and games against top-four rivals Chelsea, Wolves and Manchester United in the next four weeks.

Mourinho has no out-and-out striker to call on, having declared academy prospect Troy Parrott not ready, meaning options are limited to playing Lucas Moura, Dele Alli or Steven Bergwijn.

“The situation couldn’t be worse in terms of options,” Mourinho said. “I think that’s a very, very, very obvious situation. There is nothing that you can do.

“You are going to play with the players we have available. The players are going to give absolutely everything which is what they are doing. In some periods I was worried about not having attacking options on the bench.

“Now I don’t have attacking options on the pitch.

Spurs made it to last season’s Champions League final through a period of adversity and Mourinho hopes Leipzig underestimate them at the Tottenham Hotspur Stadium on Wednesday night.

“I’m not going to give up and probably opponents, they are thinking, ‘Wow, now is the time to kill them’,” he said.

“I understand why they think that way but we are going to give everything and I don’t think it’s going to be easy for Leipzig to play against us.

“I don’t think it will be easy for them.”

Spurs might have been considered favourites to progress before this news, given their experience in the competition and the fact that it is Leipzig’s first-ever knockout game at this level.

Mourinho went to watch them against Bayern Munich in the Bundesliga last week and says their position of second in the title race shows just how strong they are.

He said: “Leipzig have the power of a very good team, very good players and of course an emergent club without a history like the big ones that you have in Europe but with the potential to be first in the Bundesliga for many months.

“To be second, one point behind and to be fighting for the title – I think that tells a lot.”

Erik Lamela will be assessed ahead of the game, but Son joins Kane, Moussa Sissoko and Juan Foyth on the injury list.