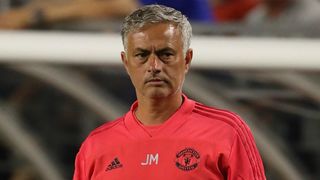 Jose Mourinho refused to comment on whether Manchester United's current squad can win the Premier League as he spoke enviously of rivals Chelsea and Liverpool.

The Red Devils boss has cut a consistently frustrated figure during their United States tour, which has produced unconvincing draws against America and San Jose Earthquakes.

His irritation has been exacerbated by the unavailability of World Cup stars including Romelu Lukaku and Paul Pogba while a conservative transfer window contrasts in particular with heavy spending at Anfield.

Questioned whether he has the resources to win the title, a blunt Mourinho replied: "I do not answer your question."

Mourinho went on to voice his dissatisfaction with the depth of the squad presently at his disposal with Fred, Lee Grant and Diogo Dalot the three United signings made so far.

"No," he said when asked if he was content with the group he has in California.

"I've got the facilities as always. I've got the incredible commitment of the people that are involved in the process of preparing a good pre-season.

"I'm happy with the matches and the evolution of the matches, but I don’t have the players to work.

"I don't have the majority of the players that are going to be in the squad on August 9 when the market is closed and we can make the squad official for the season.

"If you look to the players Chelsea and Liverpool have in pre-season, especially these two teams and also Arsenal, I think if you compare you see the difference of the situation.

"Manchester City and Tottenham are in a similar situation as we are, but we can see that some other clubs are in a different situation."

The former Real Madrid manager's mood has not been helped by another fresh fitness concern in defence.

Marcos Rojo sustained an injury at the World Cup that has left Mourinho uncertain as to when the Argentina man will join his team-mates in training.

"I don't know. He's with the medical department, in contact since the World Cup, where he ended with some physical problem," Mourinho said of Rojo.

"The medical department has to decide if he joins us here or goes to Manchester to recover and wait for the team."