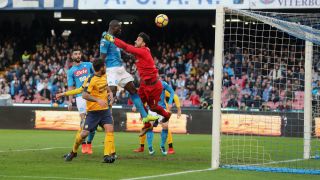 Napoli moved four points clear at the Serie A summit thanks to a 2-0 win over Verona at the San Paolo.

Kalidou Koulibaly's second-half header broke the deadlock for Maurizio Sarri's men, who spurned a number of other chances against a side who sit second from bottom of the table and have now lost four of their last six matches.

Jose Callejon volleyed home a second 12 minutes from time to secure a fourth league win in a row and increase the gap to champions Juventus, who play their game in hand against Cagliari later on Saturday.

Napoli's first-half dominance was countered by their own wastefulness in front of goal, with Dries Mertens turning Lorenzo Insigne's cross against the outside of the post with their best chance.

Insigne came close with a dipping effort from 25 yards out and the Italy star nodded Callejon's clever cross against the woodwork early in the second period, before the Spaniard saw a goal disallowed for a close offside call.

4 - Kalidou Koulibaly has scored the most goals among defenders in this Serie A (four). Mighty. January 6, 2018

The breakthrough finally came in the 65th minute, as Koulibaly jumped high to nod Mario Rui's corner home, although Verona were furious the centre-back was not deemed to have fouled goalkeeper Nicolas and there was a three-minute delay to the restart when head coach Fabio Pecchia initially refused to leave the dugout after being sent off for his protests.

Callejon made the win safe 13 minutes later, steering in Insigne's cross despite Nicolas' best efforts, as Verona missed out on the chance to climb out of the bottom three.