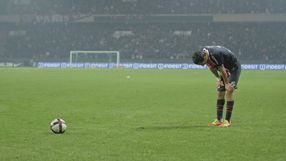 The 31-year-old, who was the league's joint top-scorer last season with 21 goals and helped PSG finish second, has been at odds with coach Carlo Ancelotti for weeks and has not played competitively for more than a month.

"It has been difficult because I was still dreaming to play for Brazil and meet up with my family," added Nene, who was close to signing for Brazilian side Santos last week.

According to media reports Nene will sign an 11 million euro 18-month deal.

"Things like that only happen once in a lifetime. I don't know if people will understand... I just thought about my future and secured it for my family," he said.

Nene has played 79 league games and scored 36 goals for PSG but only featured in nine league matches this season.

Ancelotti dropped him out of the squad after the player struck the roof of the dugout with his hand and argued with coaching staff during the Champions League home win against Porto last month.

Since then, the Brazilian has only taken part in a friendly against a local club during the winter training camp in Qatar.