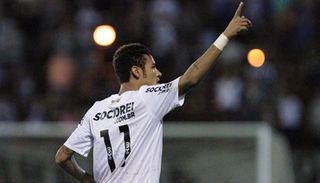 Neymar is with the Brazil squad preparing for the Confederations Cup, but the federation's technical co-ordinator Carlos Alberto Parreira said they had allowed the forward to travel to Spain after Sunday's friendly against England in Rio de Janeiro.

"Not only do we agree, but we authorise him to be presented, to do all the interviews he has to do," Parreira was quoted as saying in the Spanish media.

"[Then] he will return to the squad base with his head focused on the national team and the competition."

Barca said on their website: "In an intense day, the striker will take the habitual medical tests before signing his contract with Barcelona for the next five seasons.

"On the same day, he will give his presentation press conference to the media and feel the warmth of the fans in a photo session that will be organised on the pitch at the Nou Camp."

Barcelona have one match left to play in La Liga at home to Malaga on Saturday, when a victory would see them match the league record haul of 100 points set by Jose Mourinho's Real Madrid last season.

Brazil host the Confederations Cup, the eight-nation warm-up event for next year's World Cup finals, from June 15 to 30.