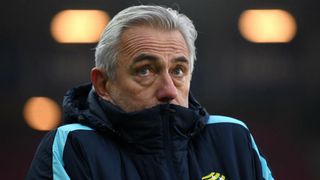 Ola Kamara netted a hat-trick to consign Australia to a 4-1 defeat in Bert van Marwijk’s first match in charge on Friday, getting the Dutchman’s World Cup preparations off to a false start.

Dutchman Van Marwijk has been appointed to guide the Socceroos through to the end of the tournament, with Graham Arnold set to take the reins upon their return from Russia after Ange Postecoglou walked away from the role in November.

But the former Netherlands and Saudi Arabia coach witnessed an uninspiring display from his players in Oslo, despite going ahead through Jackson Irvine after 19 minutes.

The Hull City man's opener was cancelled out before half-time by the lively Kamara - the LA Galaxy striker seemingly keen to impress after learning he will soon be joined by Zlatan Ibrahimovic in California.

After Irvine's defensive lapse at a free-kick opened the door for Tore Reginiussen to score Norway's second, Kamara doubled his own tally before making it a treble in stoppage time.

Norway made the brighter start at a sparsely populated Ullevaal Stadion, with Fredrik Midtsjo and Kamara both trying their luck from the edge of the box in the early stages.

Kamara then played a superb throughball for Bjorn Johnsen, but the ADO Den Haag forward could only fire straight at Mathew Ryan.

When the opening goal arrived, it came very much against the run of play, with Irvine rising to meet an Aaron Mooy corner with a header that was too powerful for Norway goalkeeper Rune Jarstein to deal with.

Jarstein showed greater command of his penalty area when he rushed out to collect Mooy's next corner delivery, and Norway soon had the goal their first-half showing merited.

Mohamed Elyounoussi's cutback from the left byline set up Kamara to finish from six yards out, sending the sides in level at the break.

And it took only three minutes of the second half for Norway to move in front, as Irvine strayed out of position at a free-kick, allowing Reginiussen the space to head home unmarked.

Kamara's impressive display then yielded a second goal, when he slotted into the bottom-right corner after being played in by Markus Henriksen, before the former Columbus Crew striker cut inside to rifle home a sixth goal in five starts for club and country.