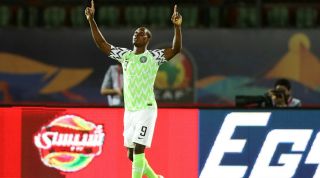 Mark Bosnich believes Odion Ighalo could have a similar impact to Eric Cantona at Manchester United.

The Red Devils completed the surprise loan signing of the striker from Shanghai Shenhua last week.

Ighalo will spend the rest of the season at Old Trafford as cover for the injured Marcus Rashford.

And Bosnich is optimistic that the move will pay dividends, even going as far as to compare the addition of Ighalo to the acquisition of Cantona in 1992.

The Frenchman helped United win the Premier League title in his debut campaign at the club, before going on to lift another five major trophies.

"This was an emergency signing," the former United goalkeeper told Sky Sports.

"I can understand a lot of people taking about a scattergun approach; well it had to be with Marcus Rashford being out.

"The top four is still possible for Manchester United, they had to go and get somebody.

"The boy that's come in has got nothing to lose, nobody expects anything unbelievable from him but they definitely needed somebody in that position.

"You never know. A long, long time ago Manchester United signed a certain Frenchman [Cantona] who no one really expected much from and he ended up propelling them to one of their most successful seasons of all time.

United are currently six points adrift of the top four, but Bosnich believes Solskjaer's side are still in the race for the final Champions League qualification spot.

"I think they can, there's no doubt about that," he added. "Six points at this stage of the season for me is still nothing.

"The big question of them not scoring goals is the way that they're playing. People would have a lot more confidence if they had been watching performances and saying, 'okay this team is actually going somewhere.'

"I do believe that they are. Whether or not they'll be able creep into that top four at the end of the season is a different question entirely.

"There's a still a chance, regardless of what anyone says they're still in the mix."