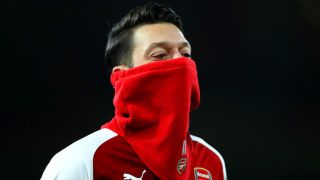 Mesut Ozil has got Arsenal fans excited on social media after teasing his followers about "signing things" amid reports he has agreed a new contract.

The Germany international is said to have finalised terms on a new three-and-a-half-year deal worth £350,000 a week, bringing months of speculation over his future to an end.

Although the Gunners have yet to announce the news, Ozil has dropped a huge hint over the deal with an image shared on his Twitter account.

The 29-year-old tweeted a photo of him autographing pictures, along with the caption: "Had a busy day signing things."

The post has been welcomed by Arsenal fans, who have already been buoyed by the club-record signing of Pierre-Emerick Aubameyang on transfer deadline day.

Ozil had been linked with Manchester United, who signed Alexis Sanchez in a swap deal with Henrikh Mkhitaryan this month, and had only six months remaining on his deal.