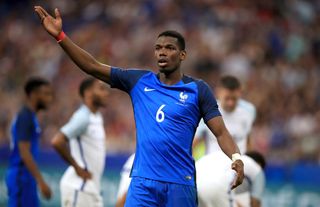 Paul Pogba has withdrawn from the France squad for their upcoming Euro 2020 qualifiers with an ankle injury.

The Manchester United midfielder played the full 90 minutes in a 1-1 draw at Southampton on Saturday but was pictured limping out of St Mary’s, and the French Football Federation has announced he will take no part in the matches against Albania and Andorra.

The FFF posted a tweet wishing Pogba a speedy recovery, while announcing uncapped Arsenal midfielder Matteo Guendouzi as his replacement.

The seriousness of the injury is yet to be determined and United are unsure whether Pogba will be fit to face Leicester on September 14.

Paul Pogba limping out of St Mary’s after twisting his ankle in #MUFC’s draw with #SaintsFCpic.twitter.com/HxIv7GQza5— Simon Peach (@SimonPeach) August 31, 2019

“Pogba had played a full match for United at the weekend, in the 1-1 draw against Southampton in the Premier League, and it currently remains unclear how serious his injury might be,” read a statement on United’s official website.

“As ever, a full assessment will be made at the Aon Training Complex in due course.”

Guendouzi has been handed his first international call-up and arrived at Les Bleus’ Clairefontaine training base on Monday morning.

The 20-year-old, signed from Lorient in 2018, has started each of the Gunners’ four Premier League games this season.

He assisted Pierre-Emerick Aubameyang’s equaliser during Sunday’s 2-2 draw with Tottenham in the north London derby at Emirates Stadium.

Arsenal tweeted: “Congratulations, @MatteoGuendouzi – we’re so proud of you.”

France face Albania on Saturday at the Stade de France, before hosting Andorra at the same venue three days later.